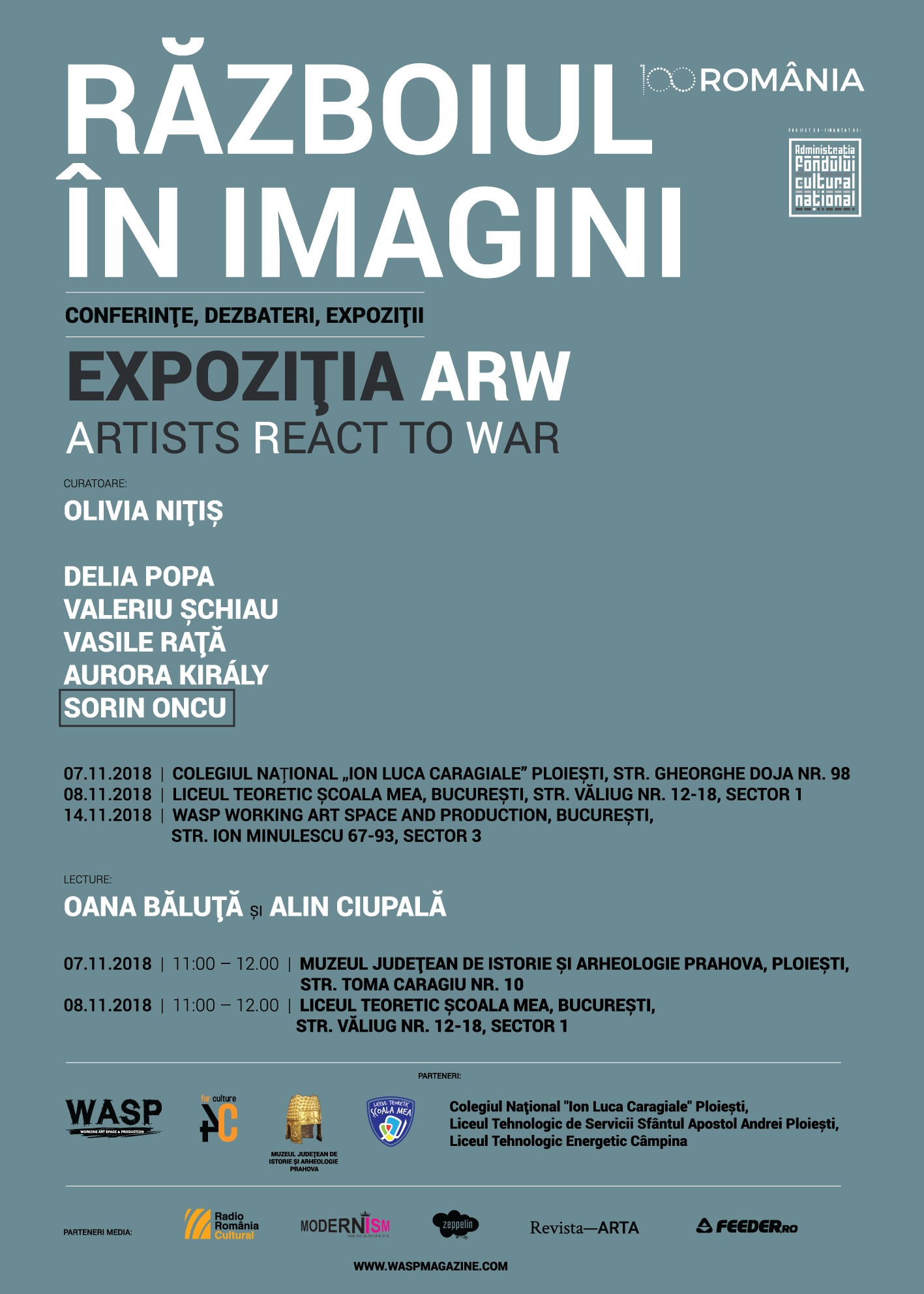 WASP Studios and 4Culture Association invite the public at the series of conferences, debates and exhibitions organized within The war in images – context and representation project, which brings into question historical, political, social and artistic aspects related to the two world wars, as well as contemporary conflicts. The project is addressed especially to young people, with events taking place in several high schools in Ploiesti and Bucharest, at the County Museum of History and Archeology Prahova and at WASP Working Art Space and Production, during November 2018.

Named ARW – Artists React to WAR, the exhibition includes the works signed by artists Delia Popa, Valeriu Schiau, Vasile Rata, Aurora Király and Sorin Oncu, under the curatorial signature of Olivia Nitis. The exhibition introduces five perspectives on the war by capturing different characters, actions and emotions. We learn about the hero women and nurses from the First World War from Delia Popa’s installation, we discover the grandfather hero and the meaning of heroism in the work of Valeriu Schiau, Vasile Rata presents the refugee camps and the Yugoslav wars, we find out about migration and terrorism from Sorin Oncu’s works and, last but not least, Aurora Király addresses the theme of empathy in relation to history and the events someone didn’t go through.

“Contemporary artists relate to post-conflict trauma or current trauma in the current wars, taking into account the particular context and their personal history. Neurology research on artistic imaging has demonstrated that regions of the brain involved in experiencing emotion and planning are activated during exposure to artistic imagery, thus visual activates a different area from the standard one at the level of object recognition. However, emotions are educated, cultural built, and image interpretation is based on individual evolution and personal knowledge. It is important to undertake understanding and learning history through the emotional impact that visual can determine. Visual art addresses historical content through emotional connection with the viewer, who is differently challenged when it comes to understanding a fact or historical event over the passive watch of a news channel”, declares Olivia Nitis, curator of ARW – Artists React to WAR.

Presented in several spaces, the exhibition will be every time preceded by a conference that generates an unstrained dialogue about harsh realities, between high school students, artists, theorists, professors and the general public. The invited theoreticians, Oana Baluta and Alin Ciupala, will address issues such as gender violence in the Romanian space – stereotypes, reconfigurations and challenges – and the First World War at feminine. The works will be reproduced for each selected location to host the exhibition.

The program of debates and exhibitions:

12:00 – Presentation of the works included in the ARW – Artists React to WAR exhibition at “My school” Theoretical High-school

19:30 – Opening of the ARW – Artists React to WAR exhibition and debate in the presence of artists at WASP Working Art Space and Production, 67 – 93 Ion Minulescu Street, 3rd District