“If the doors of perception were cleansed everything would appear to man as it is, infinite. For man has closed himself up, till he sees all things thro’ narrow chinks of his cavern.”

— William Blake, The Marriage of Heaven and Hell

The present day is not about one clear border anymore, it is about fuzzy borders and the spaces left in between. We live in a world of contrasts, of fragments, of paradoxes. And it seems that we ignore them. So, how do we understand the space nowadays? What is the relevance of living in-between different realities? How do the transitions from one reality to the other change the way we relate to space, to each other and to ourselves? How can we respond to this phenomenon?

Our intention was to tackle the real-virtual dialectics. For us, reality can only be defined as a result of the process of reflection, of introspection. Reality is perceived differently by each and every one of us, and therefore, reality is exposed to subjectivity. Apeiron came as a consequence of our initial theoretical set-up. Apeiron (ἄπειρον) which means “infinite”, “without” or “end, limit, boundary” is central to the cosmological theory created by Anaximander in the 6th century BC. Anaximander believed that the ultimate reality is eternal and infinite, or boundless (apeiron), subject to neither old age nor decay, which perpetually yields fresh materials from which everything we can perceive is derived. Thus, for us, Apeiron becomes an instance of what is visible, showable; an instance of the real world filtered by our sensory input.

The vagueness and fragility of today’s reality, instead of being embraced, is cut down with the help of our preconceived limitations. Thus, the man remains trapped in a universe where the reality becomes inherently approximate. The process of perception is mediated and validated by the brain. Consequently, the perception of reality is experimented through the means of our senses. Regardless of the tools used for observing/measuring the reality, the observed information is filtered from a personal vantage point; it is distorted, decomposed and recomposed. Thus, the personal reality (subjective) is fundamentally different from the absolute reality (objective), which cannot even be perceived by the individual.

Apeiron is an instance of an infinite space confined in a finite space; it is a place for and/or of your mind, an abstraction of a mental space that confronts the limits of your own perception. Apeiron is materialized in a contained and well defined space by using a set of mirrors. The mirror set-up gives the impression of an infinite reflection in which the subject is not part of. You enter a space that reflects itself to infinity (or to the limit of your own perception); a space where your presence is neglected to the extent where your thread of thoughts meets another limit within a virtually infinite space with a very clear real limit.

Through our proposal, we stand for rethinking the limit. We want us to stop taking for granted the plasticity of today’s environment, and think more elastically. We stand for the power of a dematerialized world, where the almost archaic notion of the limit can be surpassed; where we allow for contrasts to clash, where we are not afraid of experimenting; where we are not afraid of questioning the world we live in, nor the human needs that change every day; where a small gesture can be big enough. We want us to engage in the fact that things are not what they seem to be and that they could be much more.

APEIRON | 100ideas + Collective East (NL/RO) are some of the artists  in residency at X Platform, the newest international art residency for the research and production of interactive, new and trans media projects in Bucharest. 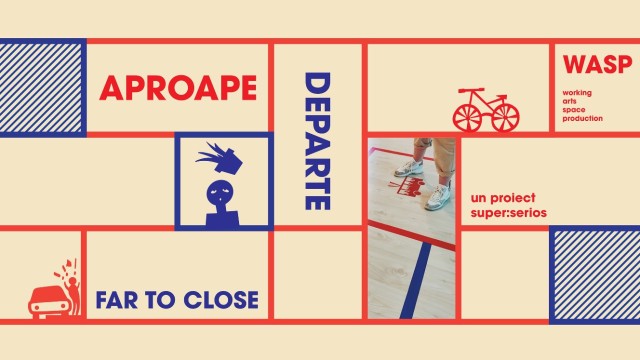