Introspection_2014 is a digital-interactive installation that involves both the artist and the user as active participants, in an visual-acoustic exploration of the random creative and decisional processes of the human mind. The installation is comprised by three distinctive and interconnected elements at the same time:

1. Creation Algorithm (Cr.A.), a conceptual recipe made from instructions which triggers the Personal Creative Hazard (P.C.H.) and defines the outcome of the experiment;

2. Matrix (M.), a visual representation of the Personal Creative Hazard, translated through a digital handwritten alphanumeric code. The code was randomly distributed in a predefined virtual surface in three different tonal intensities (20% black, 50% black and 100% black), by using a unic cipher called Personal Cipher v.2010…, made from 31 abstract symbols based on the 31 letters of the Romanian alphabet. The virtual surface of the Matrix is divided in two distinct sections.

The upper section contains 8.704 interactive symbols with sounds that allow users to discover the source cipher at the acoustic level, the sound generated by accessing a particular symbol is equivalent as intensity with the tonal intensity of the symbol. By interacting with the symbols, users can test their own Random Decision Process and generate instant sound-letter abstract messages in the exhibition space.

The bottom section represents a dynamic query section called Symbol Interaction Archiver (S.I.A), which records the user’s psychical decisions and physical actions in relation with each interactive symbol of the Matrix. This dynamic mechanism offers an insight of the users decisions during the exhibition and also generates an overall pattern of the event;

3. Creative Interval (C.I.), represents a textual transposition of the provided insights regarding the number of creative interventions, the tonal intensities of the created symbols and the time interval in which the Matrix was generated. Introspection_2014 is an interactive experiment that reflects the beauty and the complexity of human psychic behavior while giving users the freedom to engage and explore the hidden dimension of chaos seen as a random act of creation.

Artistic statement:
My creative approaches emphasize the bond that exists between art, science and technology. Focusing on contemporary innovations in neuroscience and computer science, I create aesthetic experiments where the human mind and computer softwares are used to visually decipher the complexity of random decisions manifested at a psychological level.

I think there are hidden patterns encrypted in the human behavior that define each individual ’s psychic identity. Based on this concept, using a Personal Cipher made from 31 abstract symbols as a graphic element, I generate time-based idiosyncratic fragments of my Personal Creative Hazard (P.C.H). This creative instances are presented as Matrices that can be explored by interactive or non-interactive methods. Therefore, my experiments investigate the complexity of random decisions generated by the human mind, through an abstract referential system.

Marius Jurca (RO) is one of the artists in residency at X Platform, the newest international art residency for the research and production of interactive, new and trans media projects in Bucharest. 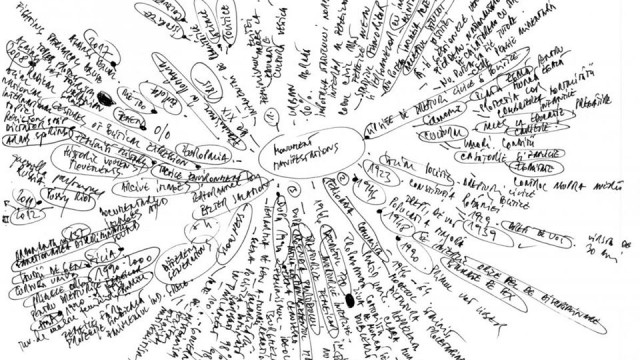