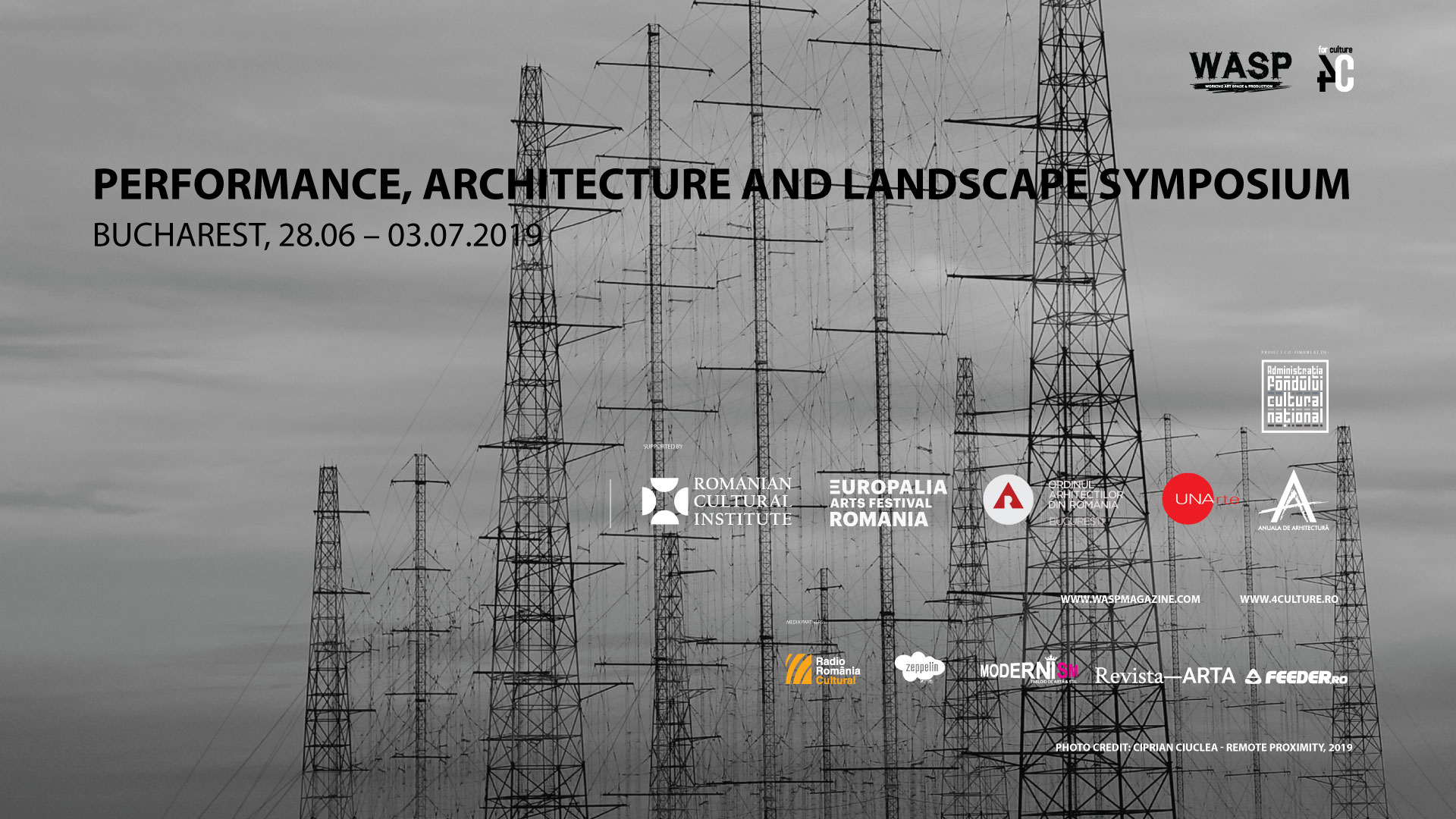 WASP Studios and 4Culture Association will organize the Performance, Architecture and Landscape symposium, from June 28 to July 3, 2019, in Bucharest. The event’s program includes installations, performances, lectures and presentations delivered by artists and architects from Romania, Austria, France, Belgium and Sweden, at WASP – Working Art Space & Production.

The symposium will be opened on Friday, June 28, at 19:30, with the BETON representation of the two Austrian artists Hygin Delimat and Martyna Lorenc, members of the performing arts company Body Architects. The performance will be followed by a dialogue between the two performers and the architect Oana Iacob – Republic of Architects. The topic of the dialogue will be the relationship between art, social communities and the public space.

Inspired by the greyscale vibe that arises in places conditioned by misinterpreted modernism, BETON performance captures the metaphor of concrete blocks. Instead of being an embodiment of the ideal given by the architect and urbanist Charles-Édouard Jeanneret, who laid the foundations for modern architecture and known as Le Corbusier, they are instead a relic of the era of absurdity. It is beton that constraints wishes, dreams and goals, inhibits human interactions and provokes aggression. On the other hand, beton is where urban culture becomes a form of expression and escape, a loud response of the young.

Nominated by danceWEB Vienna, the two artists are currently attending a creative residence at WASP Working Art Space and Production, between 19 and 29 June, 2019, in order to prepare their performance. The residency takes place in the frame of the European cooperation project Life Long Burning – Towards A Sustainable Eco-System for Contemporary Dance in Europe, sustained by European Union, Creative Europe Programme 2018 – 2022.

In the PROXIMITY REMOTE installation presented on June 29, at 19:30, the Romanian visual artist Ciprian Ciuclea addresses to the public two important questions about the activity of Hayabusa 2 Japanese probe and its long journey into the unknown, to explore space. On February 21, 2019, the probe successfully reached the surface of Ryugu asteroid, approximately 290 million kilometers from Earth in order to bring samples of rock to Terra for detailed analysis. The contact with distant worlds is possible today with the help of technology, but even so, they still remain fascinating abstractions. The experiment brings up questions, two of which are addressed by the artist: will we still have the certainty of exploring and using extra-atmospheric space in the general interest of mankind? Will (again) be the scientific curiosity left in the shadow of political interest?

The installation will be preceded by an artist talk with Ciprian Ciuclea.

The HEROES WERE PEOPLE JUST LIKE US. From selfie to monument photo exhibition, signed by Iosif Király, will be open on Monday, July 1, starting 19:30. The exhibition investigates, through reconstructions and photographic associations, various situations in which citizens of the digital age relate to history and the personalities that have marked it. Artist, architect and educator that lives in Bucharest, Iosif Király is also the coordinator of the VISIBLE X INVISIBLE exhibition. This includes projects created by students of UNArte (Department of Photography and Dynamic Image) and Bucharest University (Faculty of Letters) and can be visited in the WASP space until the end of the symposium.

The evening will continue with the Diaphragm Leap!? performance, presented by artists Eva Chariatte and Laura Kirschenbaum. Having started with a research in the studio, the work is focused on the relationship between emotions and their expressions through the body – mainly laughing and crying. This research is activated by a body practice based on the center and a muscle, the diaphragm. The voices of the two protagonists, Laura and Eve, are entering in an interplay between consonances and dissonances. This work is an attempt to communicate without words: between two bodies, between audience members and the dancers, and in the end to possibly share a common experience based on emotions.

The public presentation Diaphragm Leap!? is organized within the symposium in partnership with Institut Corégraphique International – CCN Montpellier. Eve Chariatte and Laura Kirschenbaum were nominated by ICI – CCN Montpellier, through the Dance Hub activity, to take part in the creative residency organized in Romania between June 30 – July 10 2019, in the framework of the European cooperation project Life Long Burning 2019. The artists will share the practices dedicated to the preparation of this work in a workshop held daily from July 2 to July 10 at WASP Working Art Space and Production, between 10:00 and 11:30. This project is organized within the Romania – France Season 2019.

The Performance, Architecture and Landscape symposium will end on Wednesday, July 3, with the lectures held by the Swedish choreographer Mårten Spångberg, in dialogue with Andreea Căpitănescu and Romanian architects Vladimir Nicula and Emil Ivănescu, at WASP, starting 19:30.

Mårten Spångberg is a performance related artist living and working in Stockholm. His interests concern choreography in an expanded field, something that he has approached through experimental practices and creative process in multiplicity of formats and expressions. He has been active on stage as performer and creator since 1994, and since 1999 he has created his own choreographies from solos to larger scale works, which has toured internationally.

All events have free entry.

HEROES WERE PEOPLE JUST LIKE US. From selfie to monument // Iosif Kiraly (RO)