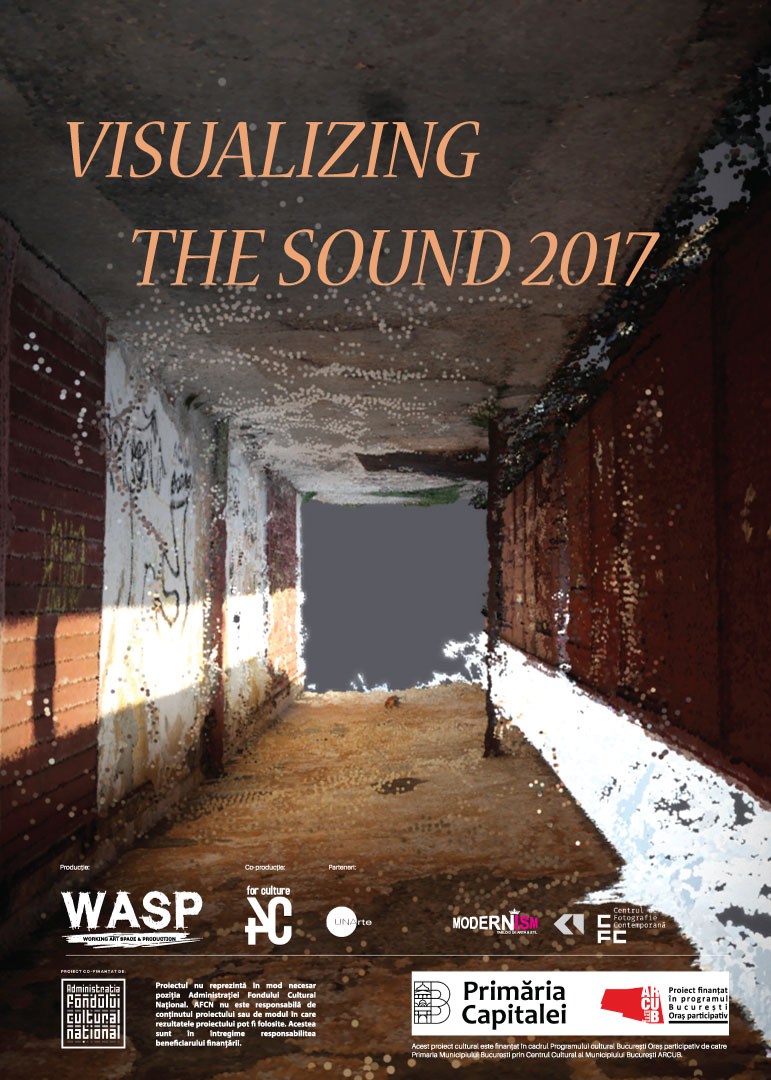 “Through an international opening, Visualizing the Sound project has managed since the first edition to activate an insufficiently explored segment in the interdisciplinary and transdisciplinary multimedia area of contemporary local art. Thus, the sound and video installations have integrated various technological and performative dimensions, with a series of language and concept transitions at the boundary between sound, generated image and visual construction. In the sound architecture of WASP (white box and black box), new audio and video creation solutions from electro-acoustic music, kinetic systems, sound performance, immersive installation, computer sound graphics, live opera, open sound art Software and financial exchange, real and artificial environmental sound. Visualizing the Sound brings together not only a diverse audience, but also creative groups from different areas of audio-visual culture, composers, musicians, performers, computer scientists, visual artists, DJs and VJs, and so on. The new edition of the project follows the continuity of this concept introducing a new challenge in the relation between sound and image, namely light art. Light art is a form of art cultivated starting with modernism and urban development, but the predecessors of electrical power used for artistic purposes were the stained glasses of cathedrals and temples, dependent on natural light, the nineteenth-century Chinese fireworks, and last but not least the shadow theater described by Plato in the Allegory of the Cave. A series of currents were born around light such as Op Art, Neon Art, Kinetic Art, and Lumino Kinetic Art. Contemporary art juxtaposes increasingly media technologies that imply light, such as video art, photography, multimedia, projection and 3D mapping, but using light as an artistic medium moves the focus from the instrument to visual creation and artistic message. In an area of economic precariousness, the relationship between art and technology is confronted with serious limits of development, although capitalist systems make the most of technological opportunities for profit and entertainment. At the same time, where technological resources are minimal, technological creation develops through imagination and self-sustaining options and DIY (do it yourself). Supporting technological development, including in the artistic environment, is important for the passage of new creative borders with profound impact on the dynamics of contemporary society. Here we are not just referring to the direct social impact on disadvantaged communities (such as Little Sun, the project by Olafur Eliasson and engineer Frederik Ottesenand dedicated to a sustainable and accessible energy form), but also to the impact on the development of artistic communities and the valorisation of creative work. Visualizing the Sound aims at creating sound, image and light installations, encouraging the use of alternative solutions, their own solutions in relation to the technology available in the spaces provided to artists. It is a project that aims to diversify the perspectives on contemporary creation by relying on inter and transdisciplinary collaborations and imaginative development, with minimal resources, of art with technological components. The current edition focuses on light art, a component with its own dimensions in the sound viewing process. “

Visualizing the Sound is a cultural project co-funded by AFCN – National Cultural Fund Administration. The project does not necessarily represent the National Cultural Fund Administrations point of view. AFCN cannot be held responsible for the contents of the project or for any use which may be made of the information contained therein. These are entirely the author’s’ responsibility.