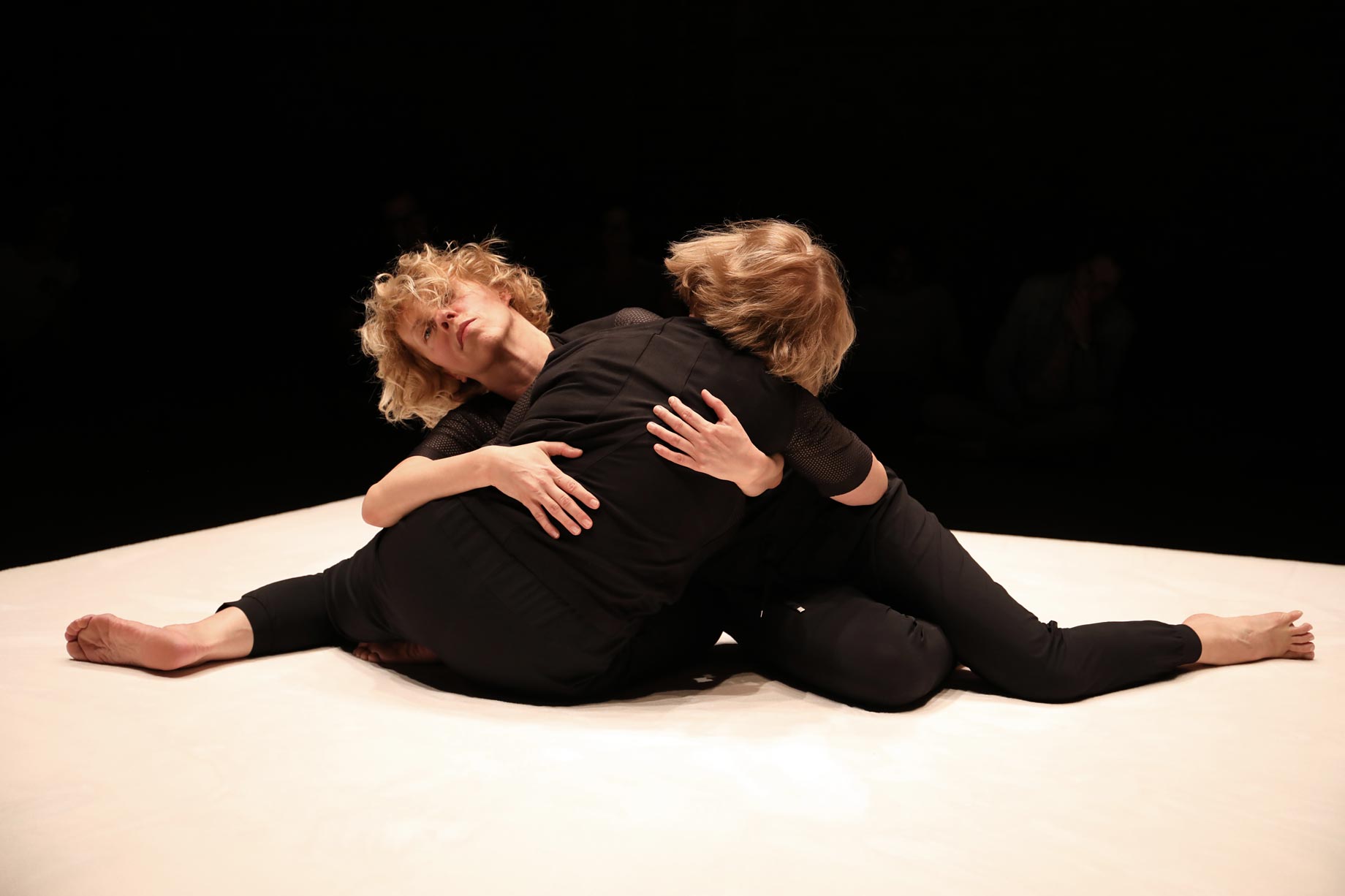 The 15th edition of eXplore festival – Bucharest International Dance and Performace Festival continues online and on air with performances, discussions and video installations. Works and discussions with and by Eszter Salamon, Manuel Pelmuș, Roel Heremans, Ilinca Păun Constantinescu, Micheline Dufert will be presented until October 25, 2020, on explore festival Facebook page.
eXplore festival #15 proposes a series of forays-essays on the relationship between movement, space and time, from the perspective of a dialogue between body-image-sound. What other moment would be more appropriate to experience new ways of artistic, real, authentic existence? What better time than now to be (and otherwise) together?
EXPLORE FESTIVAL #15 // online program 19-25.10.2020
Monday, 19.10.2020 // 15:00 // online eXplore festival
Being together (in between disciplines) / Dialogue with Manuel Pelmus (Romania/Norway) and Andreea Capitanescu
A discussion about an artistic practice in between disciplines. About artistic performative strategies as a response to the current moment and imagining other forms in which we can act and be together.
Manuel Pelmus lives and works in Oslo and Bucharest. He is one of the most influential artists of the “new performance”, being interested in the last decade to reimagine the role of performance in the context of visual arts. In recent years, his projects have been presented at Para Site, Hong Kong (2017 – 2018), Tate Modern, London and Tate Liverpool (2016); Ludwig Museum, Cologne (2016); Off-Biennale Budapest (2015 and 2017); Kyiv Biennale (2015); Centre Pompidou, Paris (2014); Van Abbemuseum, Eindhoven (2014); Museum of Modern Art, Warsaw (2014); Para Site, Hong Kong (2014); The Venice Biennale (2013), among others. In 2012, he was awarded the Berlin Art Prize for performance arts and the prize for excellence from the National Dance Center of Bucharest in 2014. Starting October 2019, Manuel Pelmus is a “research felow” at the Oslo National Academy of the Arts (KHIO).
*The registered discussion is available until October 25th, on eXplore festival page.
Thursday, 22.10.2020 // 15:00 // online // eXplore festival
Being together (in between disciplines) / Dialogue and video presentation with Roel Heremans (Belgium) and Andreea Capitanescu
Roel Heremans is a conceptual artist working with sound & technology. In most of his works he composes fragments of audio that trigger the imagination of visitors in order to create immersive group experiences. As a result, the visitors simultaneously become actors, witnesses, performers and reenactors of mental and physical processes of thought and movement, where collective performances encounter individual reactions and vice versa. By activating people in this way, Heremans generates a simulation of the contemporary world, one in which every individual is part of their own self-mirroring bubble, one in which the visitor, with their experience, remains the artist’s only metaphorical canvas.
Roel Heremans has presented in the frame of eXplore festival #15, on 17th October, at the The National Romanian Literature Museum,  DUET-C Eliade – an interactive experience for 2 to 8 visitors. This work was developed through a residency at WASP Working Art Space and Production, Bucharest, after the research of the theories and philosophy of Mircea Eliade. In ”Duet-C Eliade”, the Belgian artist creates true choreographical mental experiences. Heremans uses specific architectural models to create temporal spaces in which sound stimulates the processes of thinking and changes the visual perception. Heremans investigates the late philosophy work of Mircea Eliade, developing a participative interactive imaginary choreography.
Thursday, 22.10.2020 // Friday, 23.10.2020 // Saturday, 24.10.2020
Theodor Aman Museum, Ligia and Pompiliu Macovei Art Collection, Sutu Palace
on air Radio Guerrilla (18:30)
UNTITLED (2020) – Collective Exhibition by Manuel Pelmus
with: Rolando Matsangos, Diana Spiridon, Cristina Toma
ongoing action (ro)
The event will take place in three different spaces: Ligia and Pompiliu Macovei Art Collection, Sutu Palace, without public participation. The public will be able to experience this performance on air on Radio Guerilla, where Manuel Pelmuș will narrate the actions of the performers.
Untitled (2020), Collective Exhibition blurs the borders between a sound installation and a live performance. It happens simultaneously in different places through live sound and movement and imagines togetherness using time and space as its main dramaturgical material during times when being together and sharing the same physical space is put to a radical test. It is a permanent collection of gestures produced through a live practice which is usually associated with impermanence. People and places move together at a distance united by sound and movement, and by proposing trust, care and forms of solidarity.

Being together (in between disciplines) / Discussions with Ilinca Păun Constantinescu & Micheline Dufert, moderated by Andreea Capitanescu
Micheline Dufert – urban explorer, in the company of her partner Francis Pourcel, route tracers who break the territorial barriers of their city in Charleroi. Through their blog – cheminsdesterrils.be – and their exploratory guided tours, Micheline questions the links of love / hate towards the landscape. Micheline tries telling a story about the landscape and together they “made” the Black Loop.
The Black Loop: through industrial landscapes, post-industrial, urban and semi-rural areas of Charleroi, a signposted trail connected to the Great European Hiking Trails runs along the city’s founding watercourses, along with castles and industrial cathedrals, ancient lanes, sneaks into an English park, crosses old railway lines reassigned for the walk, invites people into a glaucous tunnel, passes through the walls, explores the remains of a mining site, a walk in a reinvented forest, climbing heaps of balconies on the city, crosses slag-territories.
Born in Bucharest in 1982, Ilinca Păun Constantinescu earned her PhD degree in architecture in 2013. She currently practices architecture at Ideogram Studio, teaches theory of architecture at “Ion Mincu” University of Architecture and Urbanism Bucharest, and leads cultural projects within the IDEILAGRAM Association. Together with her team from IDEILAGRAM, she edited `Shrinking Cities in Romania. Orașe românești în declin` (DOM publishers&MNAC Press 2019) and realized researches and exhibitions such as: Shrinking Cities in Romania (MNAC Bucharest, 2016), On Housing (Timco Halls Timișoara, 2018), Uranus Now (MNAC, 2019, initiated by S.Ghenciulescu and D.Hasnas). For the past years she has been actively involved in the post-industrial regeneration project of Petrila, one of the largest participatory project ever carried out in Romania, initiated by an internationally recognized local artist, taken over by a group of architects in a snowball effect.
Manon Istasse is anthropologist. She got her Ph.D degree in 2013 after investigating why and how non-professionals (or amateurs) get involved in knowing and preserving cultural heritage. She carried out researches in Morocco (Fez), France (Amiens and Lyon) and Belgium (Charleroi). She currently works at the Charleroi Cultural Center (Eden), where she gives interest – among others – to the local territory – Charleroi and its surroundings. Knowing and sharing about this territory is a Cultural Center’s core mission. It leads to a variety of activities : conferences, workshops, digital participative mapping, and walks with Micheline et Francis for discovering the territory and its landscapes.
Friday, 23.10.2020 // 19:00 // online // eXplore festival
MONUMENT 0.7: M/OTHERS by Eszter Salamon / performance*
Followed by a dialogue with Eszter Salamon and Andreea Căpitănescu
*with the support of Tanzforum Berlin Videoplattform für zeitgenössischen Tanz in Berlin
Eszter Salamon is a choreographer, artist and performer. She lives and works between Berlin, Paris and Brussels. She is the laureate of the Evens Art Prize 2019. Salamon uses choreography as an activating and organizing agency between various media such as image, sound, music, text, voice, bodily movement and actions. Her works evolve through various formats and aesthetics, methodologies and poetics, and put to work a wide spectrum of expressions. The works are often based on thorough research on particular issues such as female autobiography, non-human subjectivities, and hidden power structures sustaining the hierarchical systems of artistic and educational economies of productions. She conceives of choreography as a means to reflect on the value of knowledge, gestures and images. By exploring how bodies are vectors of the circulation and transformation of meaning, sheinvests in creating trans-national and trans-historical narrations.
Sunday, 25.10.2020 // 15:00 // online // eXplore festival
Zoom in/out // video-art creations (premiere)
Followed by a dialogue with Emil Ivănescu, Bucharest Architecture Annual’s curator, OAR Bucharest president and Andreea Căpitănescu, Artistic Director of eXplore festival
Emil Ivănescu is an architect and president of the Romanian Order of Architects – Bucharest Branch. In 2004, he graduated CIon Mincu” University of Architecture and Urbanism and in 2011 the PhD in architecture, with the work: „Corpul postorganic și arhitectura ambiguității” (”The Postorganic Body and the Architecture of Ambiguity”). In 2012 Emil won the contest for designing the Romanian Pavilion at the Venice Architecture Biennale and in 2014 the design for the Romanian Cultural Institute Pavilion at the Venice Architecture Biennale.
4Culture Association, WASP Studios and OAR Bucharest / Architecture Annual started their partnership  within Ergonomica (2017) and Performance, Architecture and Landscape (2019) projects.
Andreea Căpitănescu is a PhD candidate at UNArte Bucharest, artist, choreographer and performer, president and co-founder partner of 4Culture Association. She initiated and developed several international projects, as founder, cultural manager, curator and artist: eXplore festival – International Contemporary Dance and Performance Festival (annual event since 2005), European projects Life Long Burning (2013-2018, 2018-2022) and Jardin d’Europe (2008-2013), Foreign bodies (2014-2016), project EEA Grants (contemporary dance / performance, documentary film, cultural workshops and exchanges), WASP – Working Art Space and Production, Bucharest (independent space of contemporary art, founded in 2012), curator and artistic director of WASP Studios, Europalia Arts Festival – curator performaning arts programme (2019-2020).
Performance installations, video installations*
RAIN WITHOUT CLOUDS / Cătălin Crețu and Iosif Király / collaborative performance
50s SAU SOFT DESPAIR / Aurora Király / installation laboratory
NEVERMIND THE BIG PICTURE / Ilinca Hărnuț, performative video installation
UNWEAVING STEREOTYPES / Denise Lobonț / multimedia installation
PERFORMANCE SITUATION ROOM / AR performative installation, developped by Augmented Space Agency and 4Culture Association. Choreography and performance: linca Hărnuț, Diana Spiridon, Vlad Benescu, Flavia Giurgiu, Georgeta Corca. Curator: Andreea Căpitănescu*The installations can be visited between 19th and 25th of October, from 15:00 to 19:00, by email appointment at contact@waspmagazine.com.
Be with us on eXplore festival and WASP Magazine!
www.explorefestival.ro
www.4culture.ro
www.waspmagazine.com
Photo credit: @Alain Roux // MONUMENT 0.7:M/OTHERS Eszter Salamon
Sharing