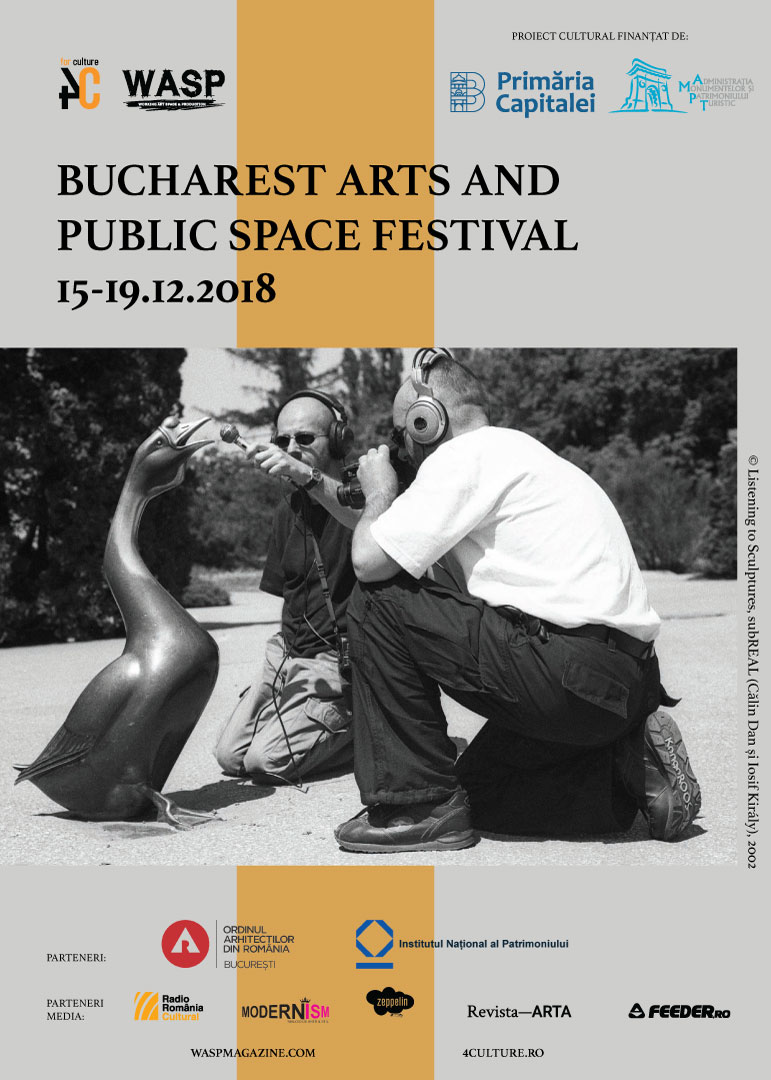 4Culture Association, in partnership with WASP Studios, launches the first edition of Bucharest Arts and Public Space Festival, which will take place from 15th till 19th of December at WASP Working Art Space and Production and Galateca Gallery in Bucharest.

„The increasing of the social dynamics, as a result of people’s mobility and the new urban contemporary communities, brings also a lack of knowledge about what our cities can offer, their history and potential for every citizen or tourist. During the first edition of Bucharest Arts and Public Space Festival, artists from Romania, Germany, USA and Belgium are invited to bring a contemporary view on urban space, starting with the cultural heritage – monuments, statues, parks, public gardens, through an artistic approach, including performances, installations and workshops”, declares Andreea Capitanescu, 4Culture artistic director.The festival will start on 15th and 16th of December at 19:00, with Duet-C Eliade, a participative performance in which the belgian artists Roel Heremans creates choreographic mental experiences using abstracts properties of the medium radio. He uses location-specific, architectural patterns to create temporary spaces in which sound stimulates thought processes and changes visual perception. Heremans examines how a system of collective thinking relates to the specific place in which that system is located. For Bucharest Art and Public Space, Roel delved into the late philosophical works of Mircea Eliade and developed an interactive imagining choreography that deals with Eliade’s idea of cyclical time. During the festival you will be able to experience his participatory-performative work for 2 up to 8 people at a time.

In Body and architecture in the urban space, the video-sound installation signed by Maria Balabaș and Andreea Căpitănescu, the city is highlighted through the sonorous presence of the body-object, a critical observer of the events and passing time.
Voices from the archive of the Romanian Broadcasting Corporation, published by Casa Radio is a performative sound installation, in which Maria Balabaș searched a narrative thread through texts and vocal timbres, for a common element – a phrase, a verse or a memory. The sound performance was born from all those meetings put together: Ana Blandiana, Eugen Ionesco, Nina Cassian, George Coșbuc, George Bacovia, Alexandru Phillipide, Henriete Yvonne Stahl, Ion Caraion, Maria Banuș, Mariana Marin, Șerban Foarță, Mihail Sadoveanu etc etc. In a moment when we don’t know whom to consider a moral and artistic landmark, this incursion in the sonorous archive of the national radio, functions as well as a remembering process, identity reconstruction and inspiration.

On Monday, 17th of December, at Galateca Gallery, Michael Douglas Kollectiv & Dana Caspersen invites participants to join a new kind of public interaction to examine the question: How do we as individuals impact the level of violence in the world? During The Exchange performance, participants move through a terrain of action that is brought to life by their motion and is shaped by their experience and beliefs. The performance utilize simple physical actions, such as walking, gesturing, and physical imagination as tools of exchange for engaging in this collective examination.

The Romanian artist Sergiu Matiș, who lives and performs in Berlin, will present on 18th of December at WASP Working Art Space and Production, the solo performance Nocturne for broken vocal cords. Nocturne for broken vocal cords is part of Sergiu Matis’s Noise Nocturnes, a series of performances and texts that revisit the romantic genre in its fascination for the night and darkness, imitating nature of recycled texts spoken at high speed or shouted, constitute the dense score of the nocturne. Choreographic tools applied to movement and voice make navigation possible through the overload of glitches and fragmented moves and sounds, by supporting chaos with coherence.