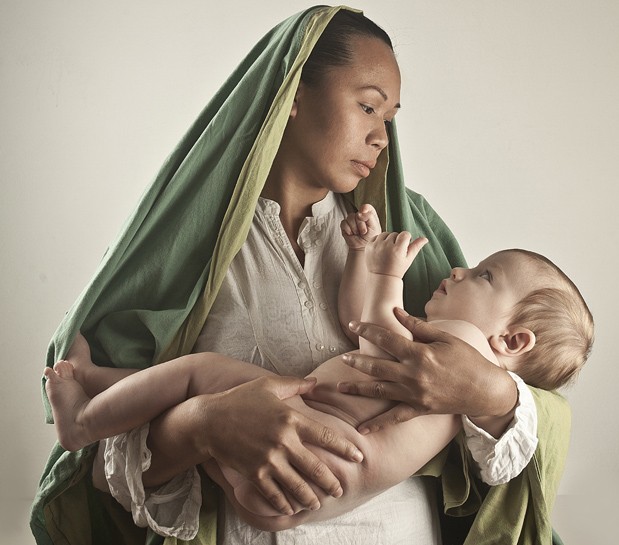 *This piece is played in English.

“Treat them as your equals and they will not forgive you for it… This is a nation of servants.”
— extract from an interview with the director of a HR agency for recruiting and placement of Filipino domestic personnel.
In a country that still exports domestic labour, hiring an exotic in-house helpers is becoming a status symbol.

Like many other Filipinos, Joy comes to work in Romania in order to support her family. The intermediating agency places her as a nanny for the two children of an affluent family. Although she misses her daughter, she enjoys her work admires her employers. Grateful to have found such a good spot she even goes beyond her duties and occasionally cooks and cleans. All goes well, until one day, the father of the family makes a move on her. When Joy complains to the wife, instead of confronting her husband, she comes up with an intriguing proposal. Soon, Joy finds herself trapped in a domestic cage. What started out as a favor is from now on demanded of her. Apart form her job as a nanny, Joy becomes their cook and cleaner.

This story is inspired by a real story. The real Joy lives in Bucharest, Romania. She is played by Ynia Lovelina, who herself went through numerous similar experiences. Like her, hundreds of Filipinos in Romanians struggle with a system which fails to acknowledge domestic work. And although they pay taxes, they do not benefit from the protection of the Romanian state. But how about domestic work in regular families? Families which cannot afford hiring a migrant worker?

Ioana Păun (b. 1984) is a director. She works on subjects related to the behaviors of turbo-capitalism. All Workers Go To Heaven (Theatre Royal Stratford East, Londra 2012), Economia Disperării (The Mexican Museum in Chicago 2013), Indicele de Indignare (Letca Nouă and MNAC 2013) confront contemporary dystopias and imagine possible situations in which the participants end up co-existing for a limited period. Since 2012, Ioana has been working on a visibility platform for the “affection industry”, together with artists, journalists, nannies and housekeepers. Recently, Ioana joined an international collective of artists and programmers that develop ways of hijacking cultural production systems, shifting focus away from the creator onto users and subjects. Presently, Ioana is undertaking her PhD and researches the possibilities of art democratization and the extension of participative forms into reality.
http://ioanapaunlive.wordpress.com

Xandra Popescu works as an artist, writer and film maker. She studied Dramatic Writing at the National Theatre and Film University in Bucharest and has a a background in Political Science. Her work looks at personal issues from a political and poetic point of view. She has co-written three films together with Sfefan Constantinescu: Family Dinner and Six Big Fish as well as several other scripts and plays. At the end of 2012 she shot her first documentary film Pink Saloon. She sometimes works under the name Soyons Impossible together with artist and performer Larisa Crunțeanu. Together, they power Atelier35 – a project space in Bucharest, committed to expanding the boundaries of contemporary art. Currently, Xandra lives and works in Berlin and Bucharest.
http://www.xandrapopescu.com