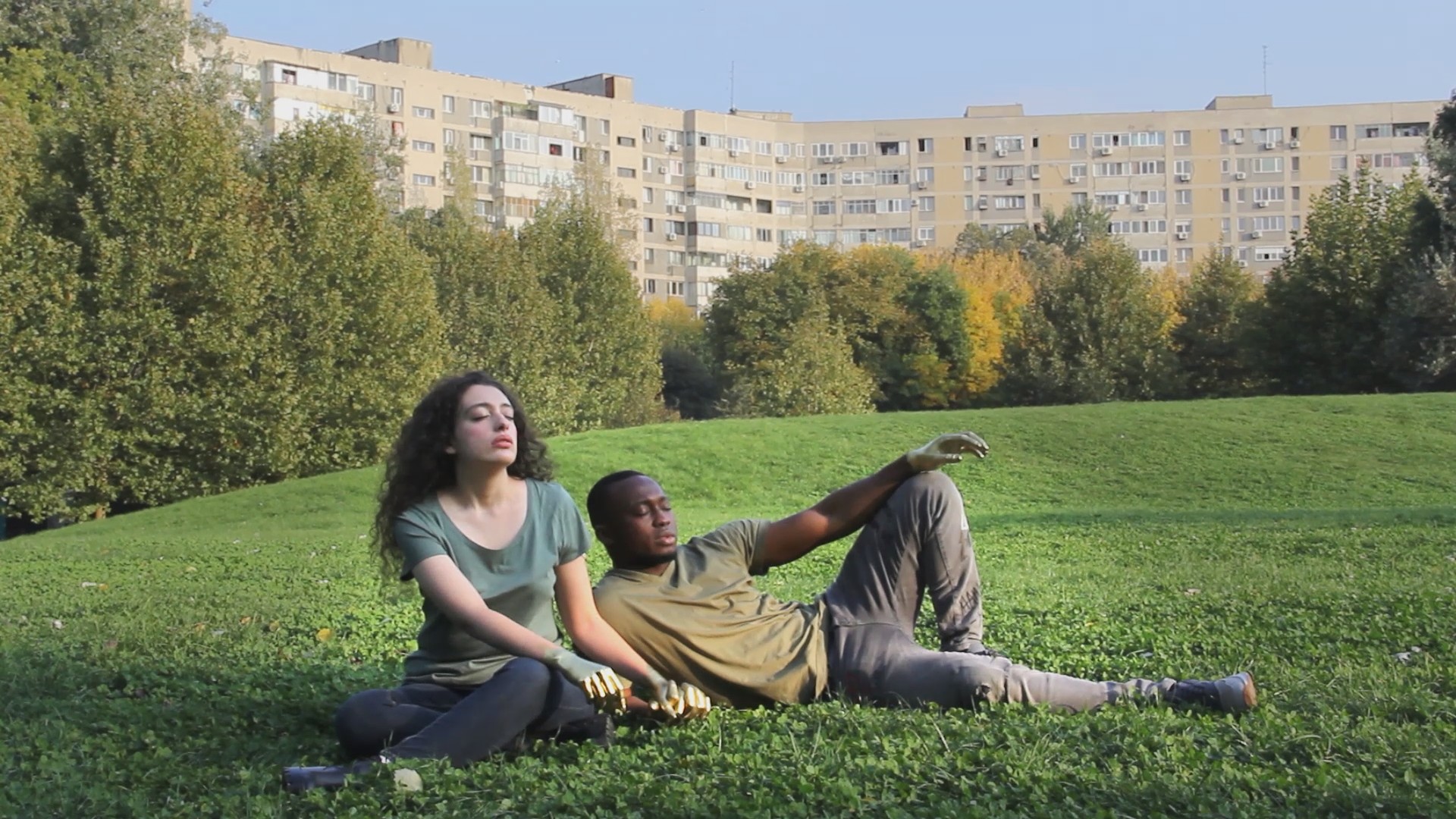 The series of images represent a large space photographed in different time periods (2017-2019) from opposite viewpoints. The affective approach to a series of images and the mystification of the observing experience encouraged a limitation in the polysemy of the photographs and also the crystallization of a personal narrative that hangs on representations from the field of collective memory (mythology), a narrative that revolves around the motif of twins (double). Inside out emphasizes how nonlinearity of events enhances the need to fix meanings around the image, this process of ordering information manifesting as a defensive mechanism against the threat of everyday chaos. In this case, the image is the window that opens from the outside to the inside. The affective distancing from the images regenerates the perception, bringing a new understanding on photography as a research tool of the knowledge systems.

Alice Feraru (b. 1995) lives in Bucharest where she works as a visual artist using several media: photography, video, drawing, multimedia installation. She started to work predominantly with photography and dynamic image in 2014, once with the admission at the National University of Arts from Bucharest in Photo-Video department, and in 2019 she graduated a master’s programme within the same department. In her artistic practice she combines personal mythologies with interest in topics such as time or memory, focusing on visual language as a mirror of her own affective reality.

The title itself refers to an object that is suspended from the coherence of reality. The concept of short circuit becomes a consequence of the failure to identify with the empirical reading of concrete time and space.

An unidentifiable space, at a reasonable scan, becomes a space ready to protect (rescue) personal memory, different sensory impulses that govern our affective existence, allowing it to constantly regenerate.

Mircea Hristescu (n. 1995) lives and works in Bucharest as a visual artist. In 2014, he graduated from Nicolae Tonitza Arts High School, and in 2019 from the National University of Arts, the Department of Photography and Dynamic Image. He has taken part in numerous group exhibitions of photography, as well as experimental film, such as: 2019 – DEZARHIVARI, ApArte Gallery in Iasi, a workshop that ended with a collective exhibition, curator Matei Bejenaru; 2018 – The exhibition of the workshop of experimental film Camera Prezenta, coordinated by Lavinia German, as part of the FILM project, curator Matei Bejenaru, at WASP – Working Art Space and Production, Bucharest; Confluențe / Kereszteződések, exhibition: Targu Mures Palace of Culture, K’arte, Casa Bernady, Finish, Balassi Intézet – Bukaresti Magyar Intézet / The Hungarian Institute of Bucharest; Reactor Spălător #2 screening, BITE-SIZED FILM NIGHT, Cluj-Napoca; 2017 – SALT, Bachelor and Master exhibition, FVPCI, Bucharest, BRD Gallery, Scena9.

“If two systems interact with each other for a certain period of time and then are separated, can no longer be described as two separate systems, but somehow, they become a single system. In other words, what happens to one of them continues to influence each other, even if distant miles or light years”.

Starting from Paul Dirac’s equation, the proposed installation addresses the increasingly acute problem of plastic waste pollution, which is a negative impact on both the natural environment and the human life.

The installation becomes a piece of conceptual art with surrealistic valences, which aims to draw the public’s attention to the awareness of the problem of environmental pollution with plastic materials, as well as on the problem of selective collection and recycling of plastic waste.

In her personal body of works, Corina Rafael experiments with different media, using varied knowledge, both empirical and scientific, from the personal “background”, in order to reach final results that contribute to the cultural and spiritual guidance of the public. Major themes that she resorts to and which become recurrent in the concepts of her work works are: orthodoxy, medicine, mathematics, love, psychology (psychoanalysis), tailoring, recycling, architecture. The topics she approaches are of the most varied, with strong personal, experiential, philosophical and intrinsic motivation: the circle, the time, the life and the death, the branches-the-trunk-roots, the problem of “perfection”, the problem of “suicide”, salvation and monasticism, the plastic, the cemetery, the cross, the vertical stripe line, the rose, the wood, the metal, the brick, the light sources, the string, etc. The types of rendering of the final images, especially in painting, experimental short film and photography, are: abstract, abstract- expressionist, strongly conceptual minimalist. Currently she works with painting, photography, film, poetry and installation. Particularly characterized by a pictorial and lyrical aesthetic, her art has the purpose of being a bandage and to awaken and guide the viewer towards cultural depth, truth and spirituality.

Life Long Burning – Towards A Sustainable Eco-System for Contemporary Dance is a multi-annual project co-financed by The European Union – Creative Europe Programme and by  by the Administration of the National Cultural Fund.