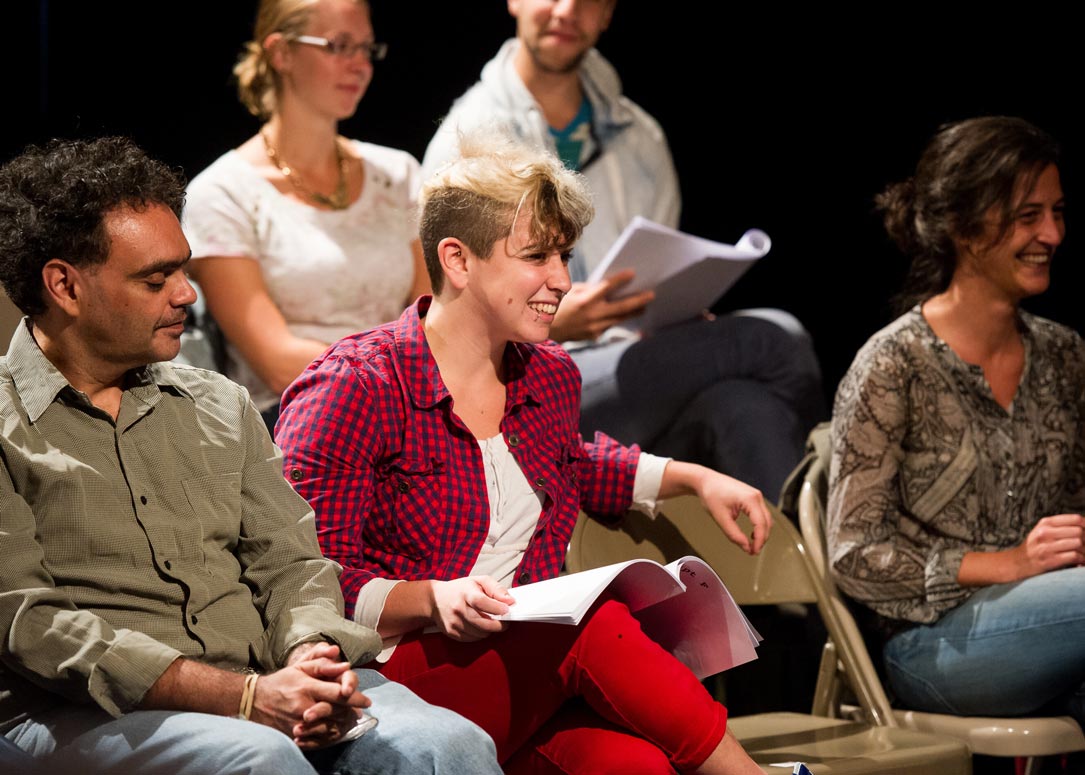 eXplore festival – Bucharest International Contemporary Dance and Performance Festival presents on Saturday, October 20, 2018, the play We Are Still Watching, created by Ivana Müller in collaboration with the choreographer Andrea Bozic, artist and theatre director David Weber-Krebs and the dramatist Jonas Rutgeerts. The play has the form of a “reading rehearsal” in which spectators encounter each other while reading a script together. During approximately an hour spent in the company of each other, they create and perform a community, making decisions individually and collectively while «simply» reading a text that someone else has written for them.

We Are Still Watching is a piece in which the idea of “spectacle” slowly shifts to where the public least expects it. Something that for a moment could look like a bad theatre play becomes an invitation to look beyond what is being scripted and leaves place for something “real” to happen.

Strongly acclaimed, the play has been played in many countries so far

An article published in Libération in 2014 mentioned that «the excellent ‘We Are Still Watching’ is an exception to the rule. (…) Let’s pass on the finesse of the writing (it requires quite some talent to imagine the reactions of the different spectator profiles when facing such a dilemma), it’s the device itself of this smart and self-reflective piece that surprises by its evocative power».

Asked later by Wilson Le Personnic, the editor-in-chief of Maculture.fr, about the liberating feeling and at the same time the difficulty of working without actors, because no rehearsals can be made during the creative process, Ivana declared in 2015: «during the period of writing, the four of us were anticipating and “incarnating” different voices that started to be formulated in the script. Those imaginary persons were sometimes based on people we knew, both personally or culturally, and they helped us to constitute a sense of “characters” in some cases. One of the most complicated, but also the most exciting, elements of the script is that we never know who will read which role. This decision is made either by chance either by the choice of spectators. So, there is no type casting possible here. We don’t know if the reader will be a man or a woman, a native speaker or a foreigner, a young person or an elderly spectator, person that everybody recognizes or a totally anonymous person».

Played in several countries, such as the Netherlands, Belgium, Germany, Portugal, Austria, Italy, the United States, and now Romania, the play is really different every time, depending on each performance. Furthormore, the artist points out in the same interview that «any piece performed in different context brings different reactions of the audience. Even performed on a different night in the same theatre a piece can have a totally different reception. That condition is inherent in how live-art (and probably any art) works. But maybe with this piece the difference is more visible because the reactions are visible both in how the piece is performed and how it is watched. I work on the piece for every new performing occasion, taking the specificity of the socio-cultural context into account. We also always translate and adapt the piece in the language of the community that performs it. This transfer into a new language already brings a lot of changes. It is very flagrant that different cultures have a different relationship to the idea of “speaking in public” and also to the idea of how to “perform” theatre. [...] Weather a performer or a spectator you have to be physically invested to be a part of it, you have to be present. This fabulous condition gives us a space for experimentation, curiosity and engagement.”

Known to the Romanian public due to her presence at the eXplore festival in Bucharest with the show “While We Were Holding It Together”, Ivana Müller is one of the most powerful voices on the European stage of contemporary dance and performance.

Her play, We Are Still Watching, translated in Romanian by The Dutch House, marks the end of this year’s edition of the festival, being scheduled to take place on October 20, at 19:00 and 21:00, at WASP Working Art Space and Production.

Based on an increased degree of interactivity, it challenges the participants to become the protagonists of the work themselves and to experience theatrical art in a much more personal manner through direct engagement. Here are two testimonials of those who took part in the show in other parts of the world: